Philippe Haffner, Chairman and CEO of Haffner Energy said: “These first annual results since our IPO reflect the ongoing deployment of Haffner Energy’s technology and its Hynoca® module and service offering to produce green hydrogen and renewable gas from biomass.

Hynoca® enables industrial and mobility players to produce green hydrogen and renewable gas with a negative carbon footprint, while being highly competitive. Hynoca® is part of a local and circular approach, strongly enhancing the value of the territories. In particular, Hynoca® provides an immediate, local, and competitive solution to the urgent need for Europe’s energy independence. Hynoca® is based on a counter-cyclical model that is hardly affected by increases in the price of gas, electricity, and raw materials, which makes it more competitive.

Following the success of the IPO in February 2022, which led to a €59.3 million capital increase, we are accelerating our development and are focused on industrial, commercial, and technological deployment as well as on structuring the Company.

We also benefit from the accelerating structural trends towards more decarbonisation and energy independence. All these strengths support our medium to long term growth and profitability targets of €250 million turnover in the financial year 2025/26 and a long-term EBITDA margin of 25%.” 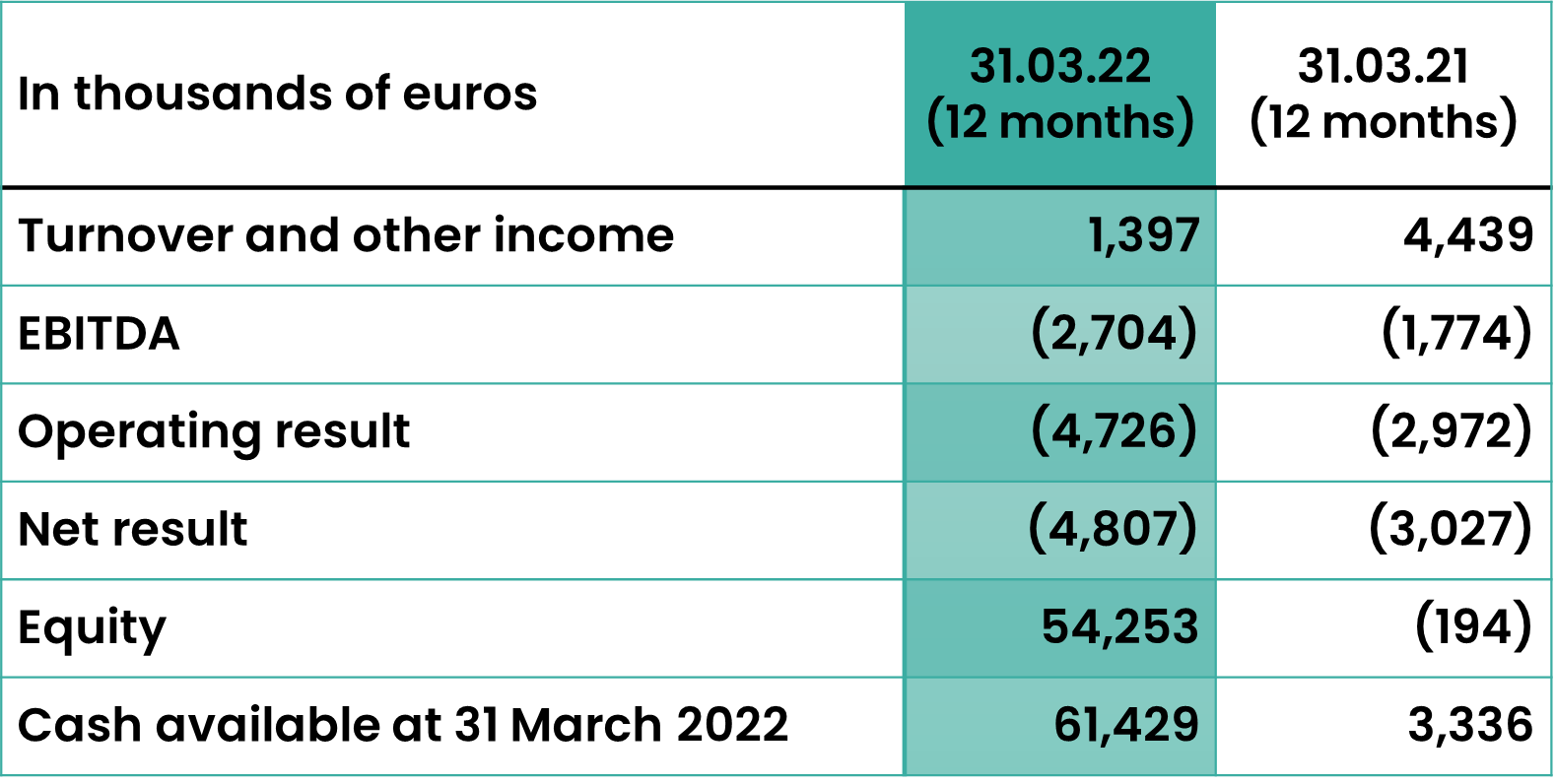 The 2021-2022 financial year is characterised by the transition between, on the one hand, the historical activity relating to energy cogeneration contracts, and, on the other hand, the new activity centred on hydrogen and renewable gas production technologies from biomass. Haffner Energy no longer receives income from its former cogeneration business, which accounted for the bulk of the previous year’s sales (€4,439k), and does not yet benefit from significant revenue from its new business selling Hynoca® modules and associated services to produce green hydrogen and renewable gas (€1,397k, consisting of the first R-Hynoca contract and licences).

Given the decline in revenues and the ongoing structuring of strong future growth, reflected mainly by the increase in salaries and external charges, EBITDA came to €(2,704)k compared with €(1,774)k the previous year.

In addition, the operating result takes into account an additional loss on completion of €1,886k on phase 2 of the R-Hynoca hydrogen production contract in Strasbourg. As previously communicated, the amendment signed on 31 May 2022 now provides for the delivery of two modules of a more efficient and compact technology, in a context of higher material and component prices.

The successful IPO in February 2022 provided the Company with the resources to accelerate the implementation of its strategy, with the following priorities:

As part of this operation, Haffner Energy benefited from the investments of industrial players, Hydrogen Refueling Solutions (HRS), Vicat and Eren Industries, with whom strategic partnerships have been established.

Concerning the partnership with Vicat, Haffner Energy and Vicat will combine their know-how to develop green solutions for the production of syngas, biochar, hydrogen and electricity, based on Haffner Energy’s patented Hynoca® technology. The solutions developed could be applied to cement plant activities, and more broadly to heavy industries with a view to their deployment in decarbonisation.

Finally, the partnership with Eren Industrie provides for the creation of a joint venture in which Haffner Energy will hold 20% of the capital, with the possibility of increasing this to 40%. Eren Industries and Haffner Energy will join forces to accelerate the deployment of the Hynoca® technology, particularly internationally, with Eren Industries providing recognised international know-how and financial resources for the development of major industrial projects in the field of renewable energy.

Among the operational developments since the IPO, Haffner Energy has finalised the organisation of its executive committee with the recruitment of Adeline Mickeler, on March 21st, as Chief Financial Officer in charge of Finance, Human Resources and Legal Affairs, and Alban Reboul Salze, on April 1st, as Chief Operating Officer to support the industrial roll-out in France and internationally.

Their arrivals have strengthened the executive committee chaired by Philippe Haffner, Chairman and CEO, assisted by his brother, Marc Haffner, co-Founder of the company and CEO and Chief Technology Officer. The executive committee is also made up of Christian Bestien as Business Development Director, Marcella Franchi as Marketing and Communication Director, Guillaume Suray as Director of Transversal Strategic Projects (HSE-CSR, IT), and Frédéric Aubert as Industrial Director.

Haffner Energy has recruited 17 employees since the IPO, bringing the current workforce to 40. 60 additional recruitments are planned for the financial year, in particular to strengthen operations and sales.

Finally, on 26 April 2022, the Board of Directors allocated 290,507 free shares, i.e. 0.65% of the share capital, to three people, all of whom are employees and not executive directors of the Company.

Haffner Energy fully benefits from the strong structural trends supporting the deployment of its technology, recently accelerated by the strategic issues of Europe’s energy independence and decarbonisation. In this context, Haffner Energy’s technology, which allows the production of both renewable gas and green hydrogen from biomass, while being only marginally dependent on the electricity grid and the cost of electricity, is becoming increasingly successful.

At the end of June 2022, the backlog has remained stable since the IPO at €33m with the formalisation of major contracts with Corbat, Kouros and Roussel ongoing.
Beyond a pipeline of €183m at the time of the IPO, commercial prospects continue to develop, both in hydrogen and hypergas (renewable gas) production, in France, including overseas regions, and in Europe.

In addition, Haffner Energy has intensified the number of constructive discussions with the industrial cornerstones that participated in the IPO: Eren for the financing of renewable energy projects, Vicat for industrial decarbonisation solutions, and HRS for hydrogen storage and mobility.

In this buoyant context, but considering tensions on the supply of key components and sub-assemblies which are temporarily delaying its development, Haffner Energy is adjusting its 2022-2023 sales target, which is now expected to be over €25m, compared to over €30m previously during the IPO. The Company has started to build up safety stocks of the most critical components and sub-assemblies.

Launched on 7 June 2022, this new segment adds to Euronext’s existing Tech offering with the objective of being a catalyst for the next generation of technology leaders. The new Tech Leaders have been selected from among 700 Tech companies listed on Euronext markets, based on criteria such as technological leadership, market capitalisation and growth.
As a member of Euronext Tech Leaders, Haffner Energy will benefit from the full range of services developed by Euronext and its partners to support participants in their listing journey, notably through a new dedicated index to be launched in July.

More detailed financial information on the annual accounts as at 31 March 2022 is available at www.haffner-energy.com/documentation-investors.
The audit process have been carried out and the audit report on the certification is being issued.

About Haffner Energy
A family company co-founded and co-managed by Marc and Philippe Haffner and a player in the energy transition for 28 years, Haffner Energy designs and provides technologies and services enabling its customers to produce green hydrogen, renewable gas replacing natural gas combined with carbon capture through the co-production of biochar through its Hynoca® process, by thermolysis of biomass. This process allows the production of hydrogen or renewable gas at highly competitive cost, is carbon negative of 12 kg (net) of CO2 per kg of hydrogen produced, while depending very little on the electricity grid and the cost of electricity. This enables Haffner Energy to make a very rapid and agile contribution to the strategic challenges of Europe’s energy independence combined with the acceleration of its decarbonization.

EBITDA corresponds to operating profit before depreciation, amortization, impairment losses net of reversals on fixed and current assets and before operating provisions net of reversals.
The backlog designates a project when at least one of the following situations occurs:
– a deposit, linked to a contract with a specific number of modules to be ordered or a specific total amount, has been paid by the customer; or
– a purchase agreement or purchase order has been signed between Haffner Energy and a customer; or
– there is a signed letter of intent or specification between Haffner Energy and a customer; or
– a project company, created specifically for a given project involving the Company’s equipment, has been established and the sponsors have made a financial commitment; or
– Haffner Energy is awarded a contract through a tender process.

The pipeline refers to a business opportunity when at least one of the following situations occurs:
– a preliminary feasibility study for the installation of equipment is or has been carried out; or
– a preliminary project budget or business plan or a full commercial offer including specifications has been sent to the customer and Haffner Energy is awaiting a response; or
– a letter of intent is sent to Haffner Energy by the customer; or
– Haffner Energy has received an invitation to participate and is part of a tender process.