Haffner Energy is the designer and builder of HYNOCA, a disruptive solution for producing quite competitive renewable hydrogen. Hydrogen is made from biomass, and not out of electricity through an electrolyser.

HYNOCA is a world Game-Changer for the renewable hydrogen market, protected by 14 patent families, and over 100 international patents.

Haffner Energy is directly derived from Soten, family owned engineering company. Soten has been has specialized in energy engineering and biomass to energy projects for nearly 30 years. This long experience and references has enabled, since 2010, the maturation and subsequent development of HYNOCA, a disruptive renewable hydrogen process from biomass.

A first large industrial and commercial HYNOCA installation, with a capacity of 720 kg per day of hydrogen, will start operation in the first quarter 2021. This unit will be operated by R-HYNOCA, a subsidiary of R-GDS in the heart of Strasbourg city. 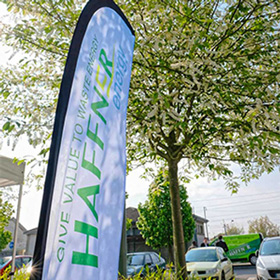 The development of HYNOCA relies in particular on a high-performance Research and Development team, all employees of the company being deeply involved. Haffner Energy inherited expertise in project engineering and in energy recovery from biomass are also key success factors.

Marc and Philippe Haffner launched Soten engineering firm in 1993. From the beginning, the company focused in industrial energy projects, mainly biomass to energy. Since the late 90s, Soten designed, managed and built numerous biomass cogeneration plants in France and neighbouring countries, including gasification.

From 2010, Soten began begun to look at new biomass gasification methods which quickly lead Marc and Philippe Haffner towards hydrogen as a promising outlet for biomass.

In 2015, the design of HYNOCA process was very advanced. The ten first patent families were filed. Marc and Philippe Haffner then proceeded to their first fundraising. It is in this context, they created Haffner Energy, 100% parent company of Soten, in order to have a company dedicated to HYNOCA development, and to the execution of EPC biomass to energy projects.

Two subsequent fundraising enabled the company to considerably strengthen its equity and finance the commercial and industrial deployment of HYNOCA.

and many prizes and awards

A large industrial and commercial